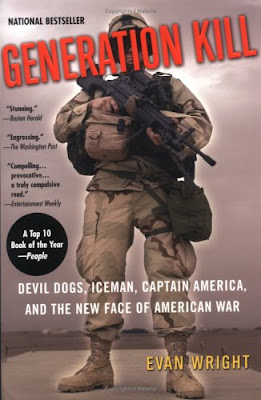 When I first saw the mini-series on HBO I had not heard about this book. While I was in the book store a few weeks later I decided to have a look. I was really enjoying the show on HBO and, in my experience anyway, no movie maker ever does a book justice on the screen.
Standing by the rack I started reading and before I had given it much thought I was through 10 pages. This almost never happens for me. Needless to say I bought it. No disappointments in doing so it seems....
Evan Wright's tale of the 1st Marine Recon during the initial stages of the invasion of Iraq is a wonderful read. While moments of the story are as disturbing as hard combat in a civilian landscape would be, it is also an insightful bit of writing displaying the very human side of men hardly old enough to be adults in society who are trained to kill in a culture that prides itself on a tradition of killing, and being the best at it, for king and country.
In addition to this quality there are two additional elements to this story that are striking to me. First, as readability goes, Evan Wright is a master. For a guy who used to make a living writing Beaver Hunt for Hustler, he has a extraordinary voice that is clear and direct while maintaining the color of the world in which the story occurs. Also, having the bravery to ride with first recon on each mission and the presence of mind to make notes and record such a detailed account speaks to a true talent for the job. (Yes, I am really impressed by this... without exception)
So, to the ratings then:
Do I think this book is worth read? You bet. Overall I give it 20 out of 20 and whole-heatedly say read it. It is well written, tells a story we should all know, and pays a wonderful tribute to the men it discusses and all from a first hand account of the story. Really well done.
Posted by Joel Pearon at 8:42 AM