The Hunting Season Warmup - Vermin in the Pond Wall

A side-angle shoot of my position, coming back from the head 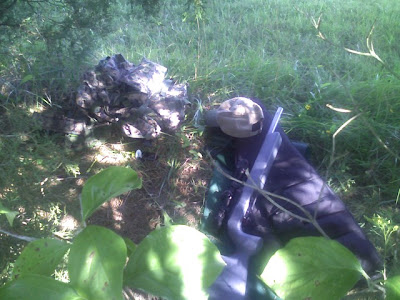 Santa Claus landed early this year. It turns out that the folks (yes, I have parents) have acquired some guests in the dam wall of their pond. My Dad purchased a 22 Mag Bolt Action Savage to eliminate the critters however, as it turns out, they can see him at about the same time he sees them. They like to run back in the holes where they came from when this happens. As it turns out I was free today to go have a crack at them and to hide in the trees and weeds to do it. No running for holes today unless I miss...

It seems like season began today... This makes me happier than it probably should. Either way I had some fun. Let's have a look here. This is an aerial image cropped out of the highest res Gmaps will provide of my folks place. It's quite a bit old. The pond in this picture is only recently constructed an still filling. Anyhow, the red circle represents my firing position and the green circle represents where I expected to catch the little furry things. (approx 100 yd from the firing position) Somehow it did not work out that way. The blue circles represent where shots were actually placed. In each case the shots were missed. I the closer two the shots were over the head by not much at all and in the further, my shot fell short. This made me feel... rusty. (and a little old) I could blame the rifle but that would be silly. I just need to practice more. Either way, I think I have Mr Muskrat's attention. 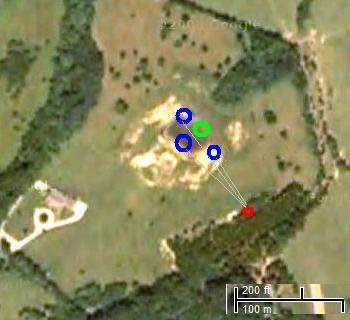 Aside from missed shots, it was a fantastic day to be outdoors. The sky was telling a story early of weather impending for tonight. The clouds were full of faces at sunrise. Check it out. Like some marshmallow tiki parade. I loved it. I wish I could have caught in the sunrise red but the camera just made it look funny. 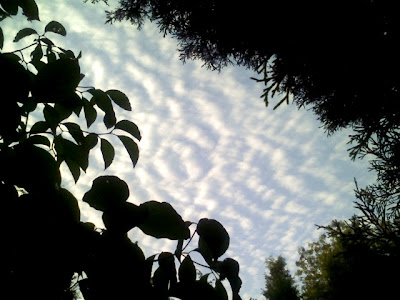 This is the view of the green circle area from the red circle. Said another way, this is the view from my shooting location to the target's hole complex. You can almost make out the worn foliage and dirt paths there. I wish I could have caught them on ground. A swimming critter head's is way harder to hit plus you really have to watch shallow angle shots into water. Bad luck if they ricochet. 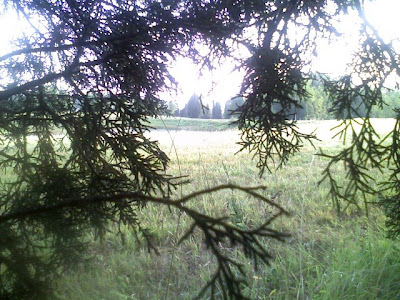 The shooting spot itself. I had the good sense to bring my portable saw from my bow kit and hacked out a nice little spot to use again on the next trip. Next time, no sand bags and definitely a cushion for the backside. 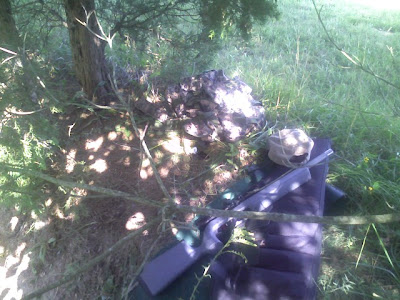 The ghost shoots magnificently with no (that is 0) FTF / FTE errors today. I will rework the trigger weights a bit and it will be my main shooter. It is sooo much lighter than the squirrel guns I built. Really shocks me some. I should take this chance to plug CCI Mini-Mags. Damned fine rounds for those of you working with match chambers afield.

So I managed to make it until about 11 today and then I got to be a good son and have lunch with my Mom. She needed a lift into Cincinnati and we had some LaRosa's and stopped at a book store. Good times all around. I figure, in the end, it's her pond. If she'd rather spend time with me and just let the vermin ride for now, I am good with it. She's more fun anyway.
Posted by Joel Pearon at 9:36 PM