Hunt #2: The Great Wind and the Great Hunt

Ike came to Ohio over the weekend and with him, some of the more impressive winds I have ever seen. I expected there to be some real damage in the happy hunting ground and truly there was. Some of the anchor trees (nav points I use) got snapped like twigs. Large branches found their way down as well. Many of the paths I have used previously were closed by debris. I had to spend some time checking footing and modifying nav. patterns but who lets that get in the way. Progress was a bit slower but still, all-in-all, it was a great day.

I had clear shots at 8 distinct squirrels today... and that in the course of 3 hours between 7:30 and 10:30. It was just fantastic. Aside from my tribute to the wind above here, I really have to give credit to the hunting shoes (see these) I picked up from Cabela's in the off season. Admittedly they are not magic and will not muffle a broken twig or not leave tracks however, I must say that when I did my part I never slipped or was able to feel the unseen debris that would have been a problem had I stepped on it.

The single shot is down for repairs for a while (not really repairs... more like modifications) and I decided it was time to give the most expensive squirrelling rifle I own a trip (its first as a matter of fact) into the trees to see what it could do. You know, on a side note here, this is just a really nice looking weapon. It came together so well for me. My only real gripe with it is that the mag release is loose all the time when a magazine is in and I will need to fix that. As a shooter, once I got the scope thing worked out it and I did not miss. (see below for discussion of 'the scope thing') 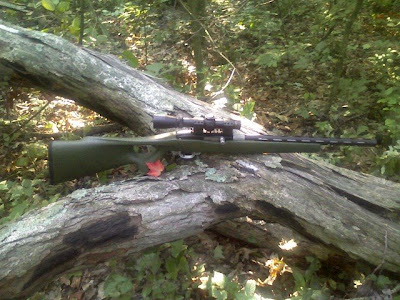 In previous posts I think I have discussed my issues with scope sighted rifles, my lack of ability to hit with them consistently, and what a pain they are to hunt with. Today I think I was able to address this. The Leupold on this rifle is a top notch bit of optics (1 to 4 power, 20 mm objective) and I missed my first four shots with it this morning. I spent a bit of time checking and rechecking the way the eye relief was set and the sight picture when I pulled it up and found some interesting things that I adjust. Most important was eye relief. With that set, I hunkered down and waited. Sure enough, squirrel #5 trotted by and stopped. Instead of snap shooting (which I seem to do well with open sights) I held on target and shot like it was paper. Bingo! Right through the spot where I was holding. Down in one shot... and the next three as well. I guess this was $ well spent for the parts on this one. It turns out the 1 power setting allows for 2 eye shooting and makes target acquisition in close a snap. 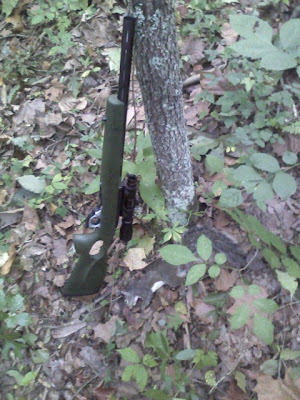 One thing I did notice, along with all the down limbs and trees and extra stuff everywhere, was that things had begun to rebuild. Probably my favorite example today was this spider building a web over the access road I was crossing. There were a couple more just like him too on down the line a bit. All I could think of was a line from Charlotte's Web where the doc says "Nobody shows the spider how to build the web. I just knows. That's the real miracle..." Indeed it is. When it comes to the combination of function, strength, and elegance I think these guys have something to teach us all... 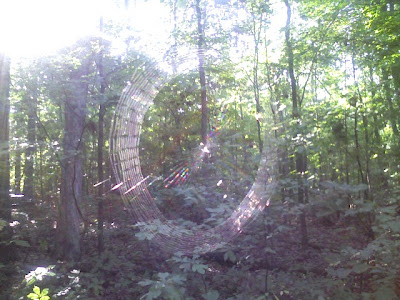 When I hunt this side of the world, the path I take almost always takes me into this field. This is one of my favorite lines / scenes in the whole place. I have another picture of this in this post. (You may also notice a picture of last year's rifle posed in the same place for the same picture... nobody said I wasn't a creature of habit...) In the fall this will become a thing of color and glory. Sad as I will be to see the green season end, the fall colors are a really sublime result of growth for another season. 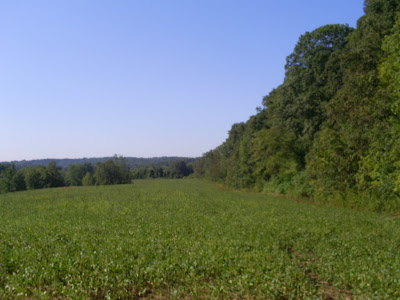 I am still hopeful I will get out again this month. Some family things have come up that I need to attend to and work is never ending and now I find that cleaning squirrel guts just doesn't stack up to playing with my 4 year old daughter. ( even for one morning, one day a week....) She wants a pink rifle and she wants to go hunting with me. She also wants to help sick animals. Not sure how that is going to work out... I guess we will see. Her momma doesn't like it one bit. (The rifle part anyway...) For now, I will stick to dollhouse and bikes and scooters.
Posted by Joel Pearon at 5:27 PM