October 12 - Oh Holy Stuff on a Waffle Cone... Are We Still Deer Hunting?

Plans are big in my world. They let me get the things I know I am sure I want to do, done. The plan for this past weekend and particularly for yesterday was just as good as it gets. A weekend visit to the folks, a Sunday of my own to hunt without the up at 3:45, 2 hour drive to sit still for 10 hours and try not to fall asleep... it was a perfect execution of really solid thinking and planning. And now comes the part that, for lack of better phraseology, we'll call buyers remorse. 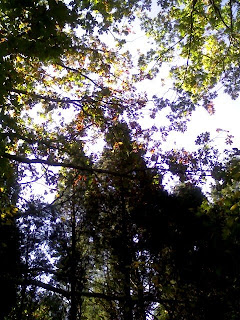 I believe I have previously commented that I had a new appreciation of guys that could stand hunt, week on week, during the bow season and to be honest I love sitting in the tree stand. There is no feeling in the world like rocking back and forth 20 or 30 feet up, chilling out and waiting on anything at all with antlers to trot on by. By the same token, however, it has been a long, long time since I was as bored hunting as I was on Sunday this week. 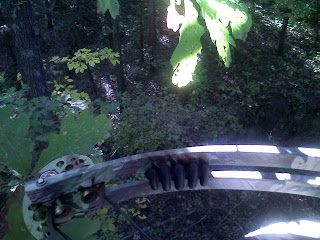 It would be way out of line to make absolute judgements about this sort of activity but I can tell, here and now, this is not a week-in, week-out activity for me. I felt more useless than a day in march when the only thing to do is watch TV. I mean, face it. If you are hunting and wishing you had a book to read or your bank statement handy so you could reconcile it, this is probably not your form or first choice for method.

Having said that, I can establish that I will probably only be taking up the bow on the ground and only when I feel a real twinge of bored with the squirrel thing. This stand thing is not for me. In my mind it very much like tartaric sex except you are not sure who will be or if you have a partner but you just decide to start anyway. Maybe it ends... maybe not. Either way, not the way I am wired. At least not for this sort of thing anyway. Should I happen to bag a killer buck after a full season of stand hunting, I would be forced to wonder what else I had missed just for the chance... not worth it. 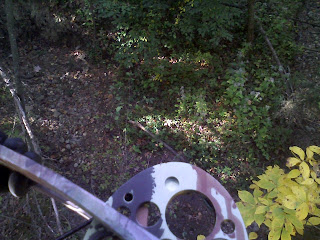 On a real up-note, the day was perfect. 80'ish and sunny with a 5 to 10 coming out of the NW. My tree was well chosen and a number of deer passed within visual range but none within shooting range. All were does. The tree stand works really well and I will say, if you're in the market, check out the Summit 180 MAX SS. Very much like a recliner in the trees. Good and bad I guess. (tough not to sleep :-) Anyhow, rock stable and perfectly quiet. I am a fan of gear that works. 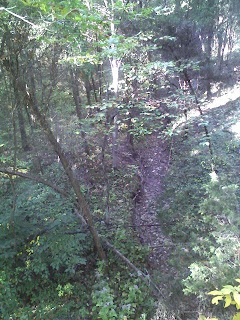 So in the end, what do we chalk this up to? Experience. I wanted to deer hunt more and I have and now deer hunting is just not special as it was. I will hold off until gun season and see if the 454 slung to my chest makes things right. If not, well, it is only 7 days and back to my thing.

Lastly, I guess you could say the best part of the plan was to have my girls close by and involved a bit. If you look here you can see the Monkey helping my hang the stand the on Saturday. (Not fun to wrestle the damned thing into place pre-dawn so she came along with me to wrestle the damned thing up in daylight...) She really liked being a few feet up and tree chair. Afterwords we went looking for deer poop and old rocks. Momma fretted about PI but we got lucky and only Daddy found that.... 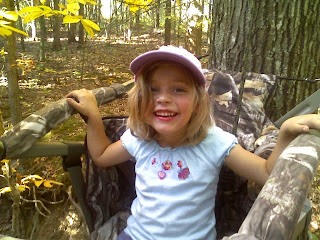 That my girl will come with me to the woods and loves to look for squirrels and bunnies and deer, well... that just makes it about 1000 times better. Can't hunt from a stand and do that....
Posted by Joel Pearon at 8:40 PM