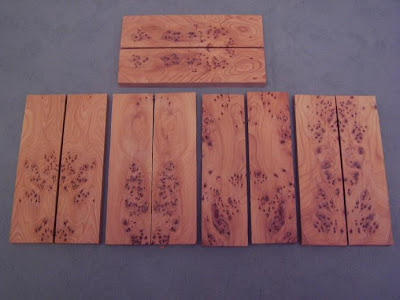 So, in all the time I have been making knives I've discovered that while I really like Maple and Walnut and Amboyna burl, English Yew really trips my switch. Where I lucked out was finding a guy who makes furniture out of English Yew who also likes to cut knife scales. He's sending me those guys in the picture above. In addition to those, I have one more set of figured Yew. This puts me to six.

For a while now I have been wanting to put together a couple of really nice two knife sets. Each would be something like a bushcrafter and a small game thing in a nice double sheath with a firesteel. I am going to use these for that. I have the firesteels ordered and all I need to do it get the time. Seems doubtful until year end at this point. Ah well.... always something. I am going to get some designs on paper and see where it lands.

Take care and more soon. Thanks.
Posted by Joel Pearon at 3:48 PM