A Thursday in Shawnee Forest

Things being what they are in life right now, I have been itching to try something new.  The whole forum / learn things / buy more gear scene has run its course for me, for now...  As has hunting I think. It's time to do something new.

I am a big fan of maps.  They hint at all of the things waiting in places I've never seen and all of the paths I haven't walked and it fills me with a sense of romance and anticipation.  This feeling finally ran me over this past week.  I wanted an unknown place to venture into and I set about finding one.  For a guy who medicates his anxiety this is really saying something...  Being older now though, it was easier to know how to be brave for the 2 minutes it really took to get away from the car and not just turn around and go home.  Adventure at last...

Shawnee is Ohio's largest state run forest and has a bunch a bunch a bunch of places to walk.  Some are specifically laid out as trails like the backpacking loop and some, like the route I took, are not.  The walk was worth it, even with the surprises and the falling down busted knee.  It's not as pretty as a forest that doesn't get worked and is allowed to get old but for an adventure on a scale at which neither my fight nor flight reflexes would be activated, this was perfect.

It's important to note that the planning for the trip worked on the assumption that what's shown as a blue line here was going to be drivable. It is, in fact, closed off and now a bridal trail.  It was some extra hiking time I hadn't counted on.  The green line is what I actually covered and the red is the additional distance I had planned on but had no time to do.  Another day... 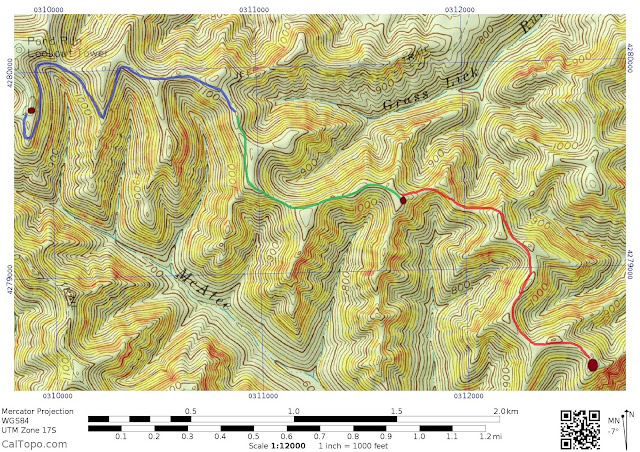 I think when we see things for the first time in life we should have options about how we get to view them.  I can thinking of no better way for me to have headed off on a hike in unknown country than with a heavy layer of mist on the whole thing.  The clarity of the whole world was reduced to the few hundred feet around me and the part of me that enjoys romance the most was at work, adding elements of Viking Lore and Edgar Allen Poe to the trip. 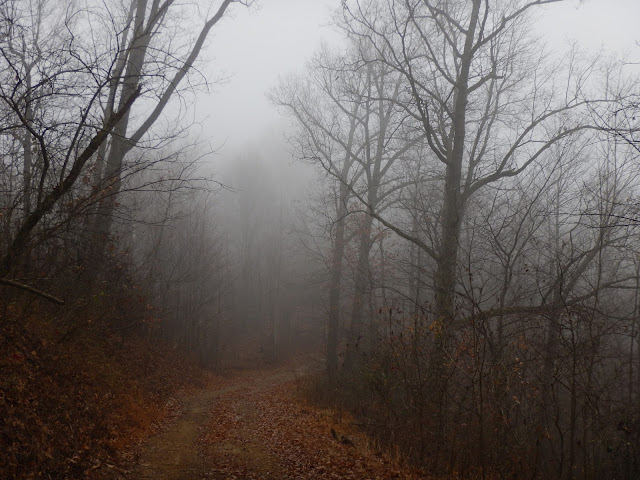 The breeze was constant and cool and the walk was very comfortable.  I continue to be pleased with that surplus ILBE Assault pack I carry for hikes like this.  Just a superb bit of gear.  A light weight fleece and my cargo pants were all I needed.  I know weather this warm in the winter would normally be applauded but I am starting to be concerned about the implications if it continues.

I came across this in the middle of one of the turns down the bridal path.  I was pleased that it didn't seem to be very active and was glad to just be able to look at it for a minute.  The pure organic shape of these hives is really enjoyable. 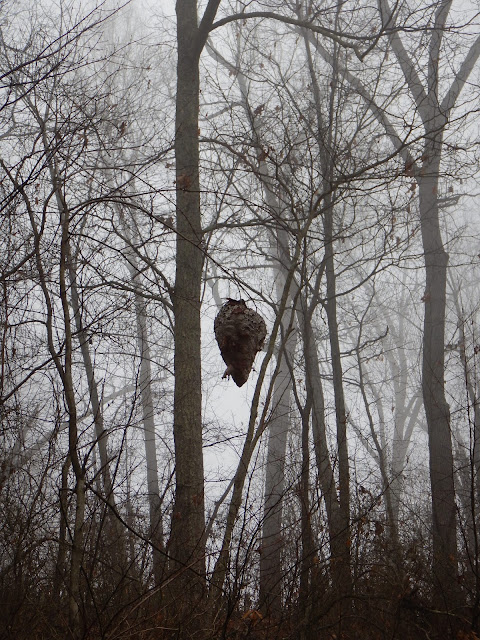 A little further out and heading back uphill the view improved a good deal.  Even with the fog I was just stunned by the size of the place.  If I was in better shape I would have tried to get on one of those less steep slopes and hang out for a while.  I'll get there soon enough.

As I was walking near the peak of one of the ridges as the road crossed over to a downhill grade, I was buzzed by a hawk.  I could only see him for a second but he was magnificent and quiet as death.  I really enjoyed my time out here. 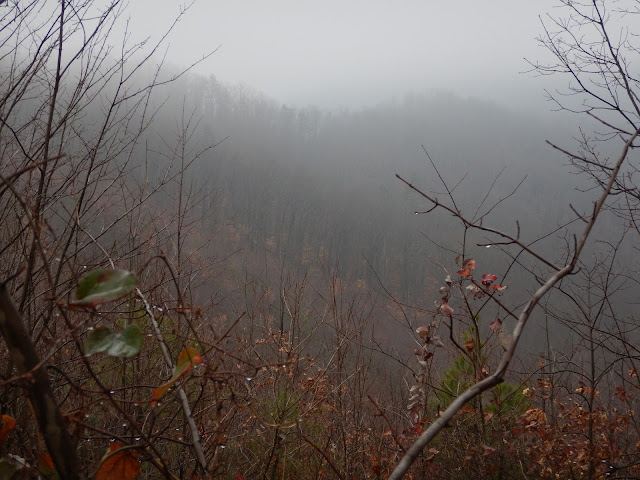 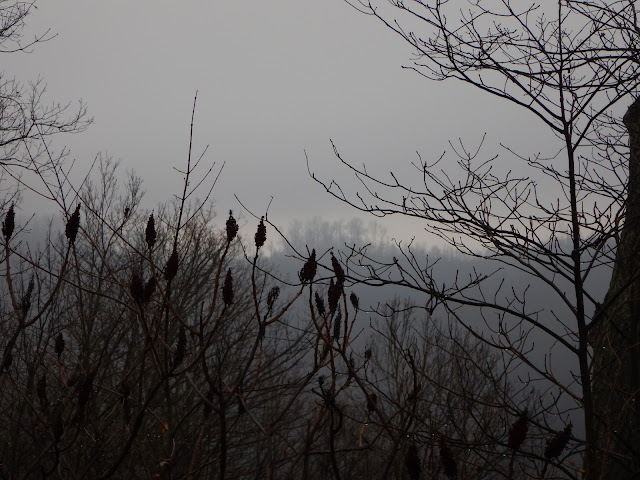 The fog gave way at almost exactly noon.  The world sort of opened up after that.  I try to pack binoculars when I can because I like to look at birds and game.  These Leupold field glasses are just fantastic for that purpose and for scanning the landscape.  The views were stunningly clear. 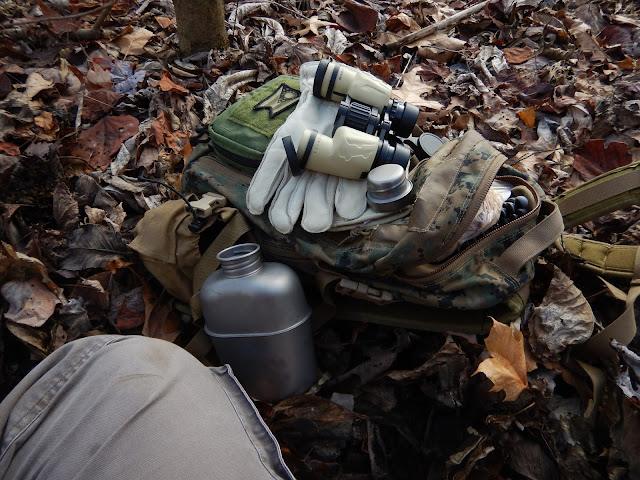 It really gave me the sense of being in some much more rugged than I am used to country.  The valleys just stretch on and on to the Ohio River. 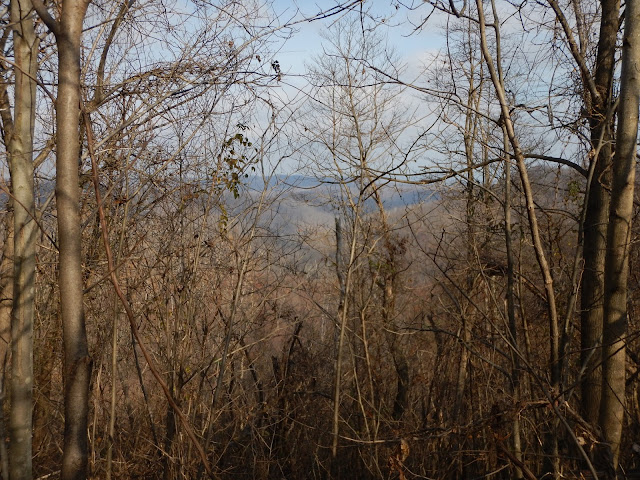 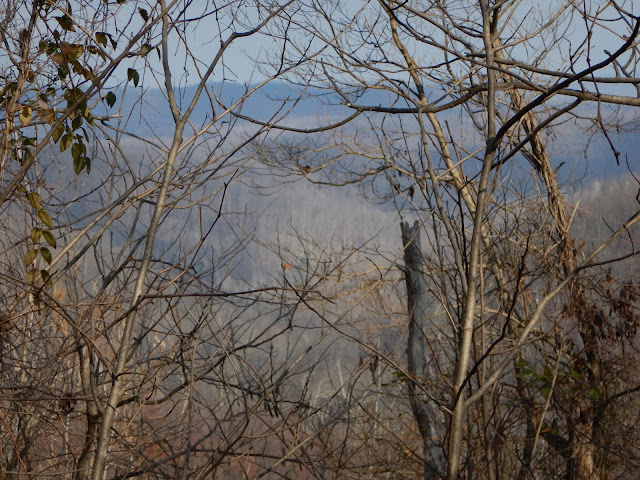 With the sun so far south this time of year, the days don't last as long as I would like.  By 2:30 or so I figured I should head back.  I didn't want to get caught hiking back after dark.  I forgot my headlamp and it would have been rough going.

One very nice thing walking out was getting to see all of the detail that was wrapped in fog on my way out.  I took about a hundred pics.  They all seemed so different when I took them but when I see them now, to anyone not there, they would all look the same.  These two were among my favorites. 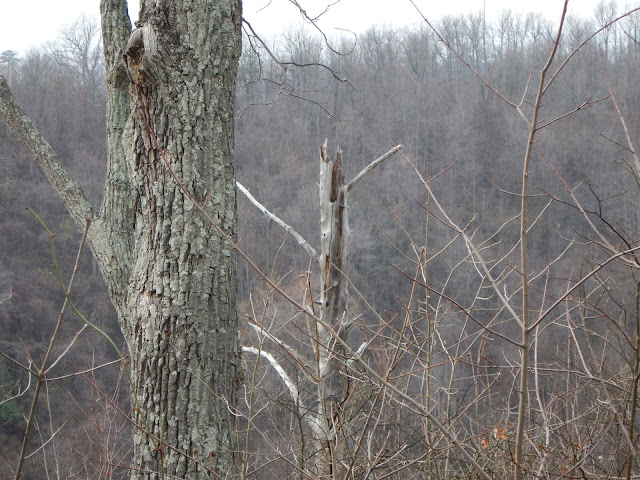 That farthest set of hills on the horizon is in Kentucky. 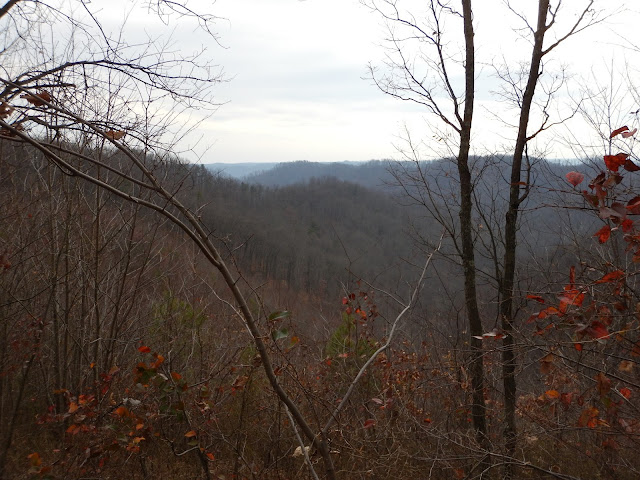 It was a truly great day for me and what a great first step into this new venture.  I was also very glad to see my little car with it's padded seats and motor to climb the hills for me...  The view down the river from my parking spot merited a few minutes of just looking and a pic. 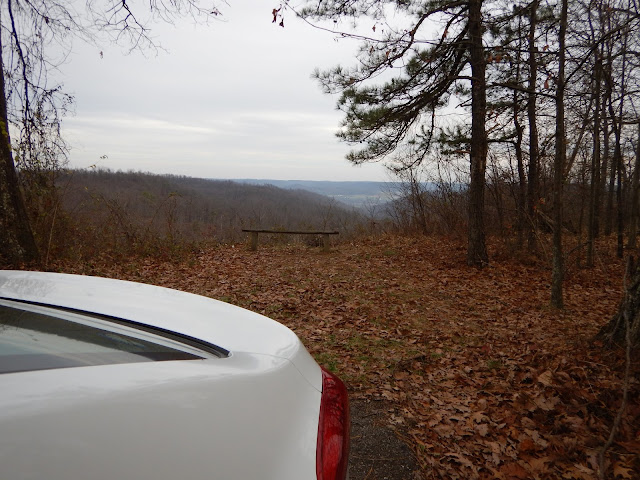 Take care and thanks for having a read.