The Last of It Until Later

Last Saturday I got to spend the day out with what I am pretty sure is the last of Winter for 6 months or so.  The drive was dicey but worth it.  I found myself up on a hill listening to big wind bend big pine trees while snow caught me in the face now and then, and it was perfect.  Gray skies and cold temps for the whole morning provided that one last glimpse of the winter before it departed for the southern hemisphere.


In places it was very much like driving in February Ohio.  The snow was for real.  The squalls were just smaller than full fledged storms.  I made it without issue but what a ride...  Adventure is good and bad weather helps sometimes.

Things cleared off just south of Hillsboro and I got back to just regular driving.  The roads were treated and plowed and the snow had stopped the heavy stuff.  I made it by 10 or so without issue. 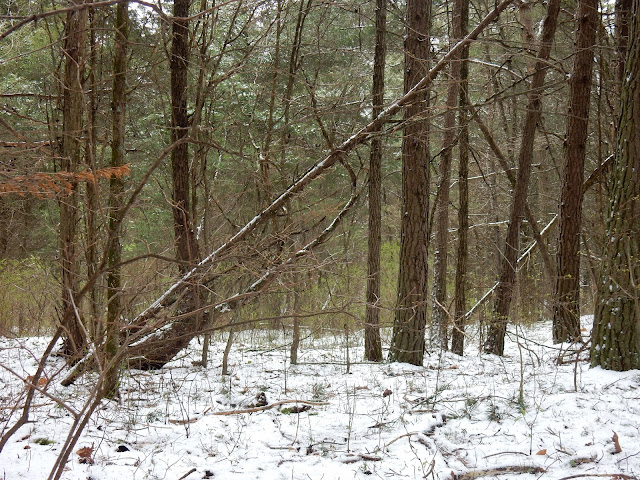 The hike in was uneventful and cold.  Cold air is easier to breath I think and I made good time in the woods.  The snow was blowing all over the place but it wasn't too bad.  I knew it wasn't going to last out the day so I just decided to be cold a while.  I stopped up on top of the hill and dragged out a new bit of gear I picked up to see how it might do...

Completely by accident I discovered that RMJ had made a hawk with a blunt head face called a Loggerhead.  I went about locating one and wound up with something called  a TAD edition.  I'm still not sure why it matters so much to guy who sold it to me and in the end, I don't really care.  The thing mad me a believer in its first outing.  These are the first swings I took with it and it was pleased.

The wind kept on a while and I mostly just sat and listened, braced up in a big pine, enjoying the last throws of cold for the season.  After a while the wind died down and I decided to seek lower elevation and have some coffee to sort out the rest of my day...  I mean, coffee is the reason, right? 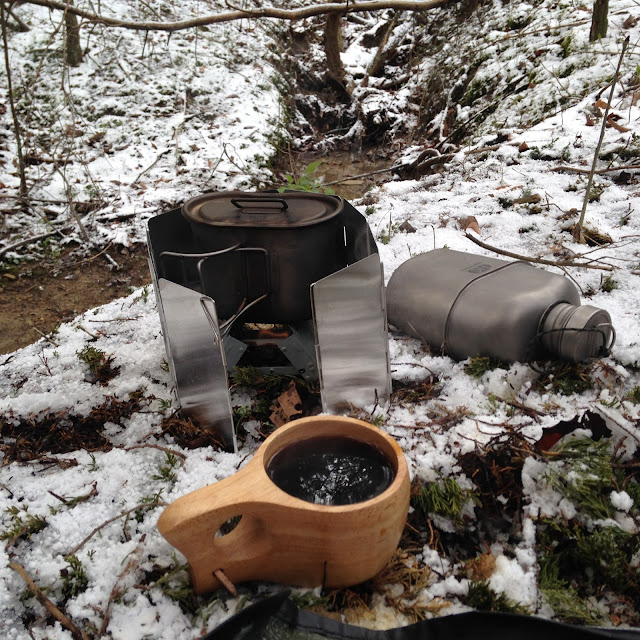 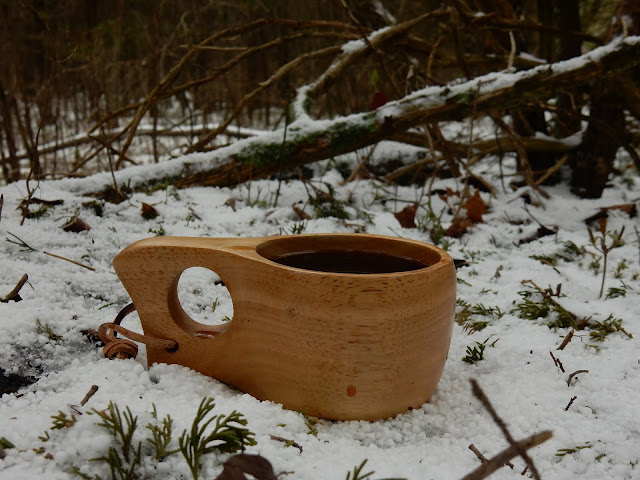 The Esbit / Heavy Cover Coffee Kit Combo performed, once again, in stellar fashion.  The coffee was ready with about 1/3 fuel cube left.  I poured some off to the Kuksa and kept the rest all hot in the canteen cup.  Starbucks Pike Place is never this good in the office....

One thing I enjoy immensely is cooking in a campfire.  There are so many good videos out there on how to cook in a canteen cup, it's just hard to nail down a technique better than another.  What I will say though is that this video changed the way I look at it quite a bit.  The idea of baking bannock on the cup with something new for me and I have used it quite a bit in the last couple of years.  This trip was no exception.  The thing about it though is to bake with coals, you need to start with a fire...  It's always something...  Reenter the Loggerhead. :)

Anyhow, as you may have guessed by the pics, a fire was made.  Notice the slow and progressive decline of the snow in each picture.  At first I was bummed because the snow was going.  Then I was really bummed about how we it got and how hard it was to get things to really burn.  We got there though.

The thing is, I am a sucker for sweet baked items with Coffee.  I have this recipe that I use to make a cinnamon sugar and nutmeg campfire bread that is just not to be believed when mixed with Maple Syrup and a good, strong cup of liquid Java hotness...  It doesn't look like much when it's baking but when it's done? 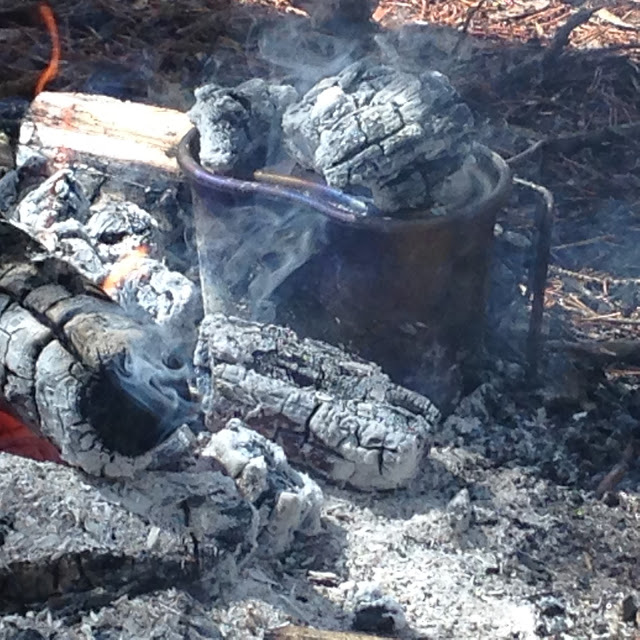 See?  Now that has real promise. 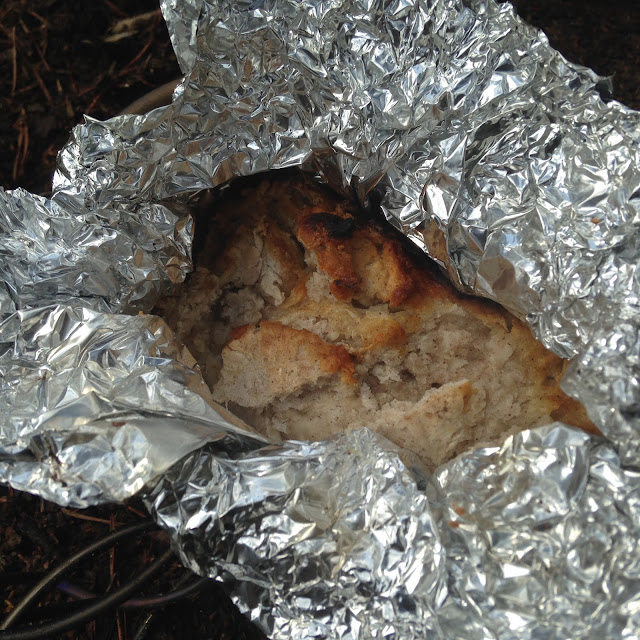 De-foil and add syrup and it is just unbeatable. 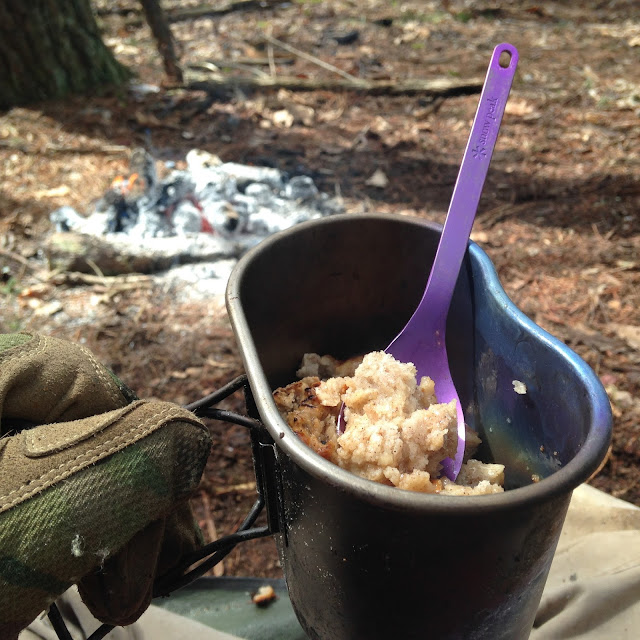 Of course, this baked thing requires more of this stuff too.  :)  (Note the full and complete disappearance of the white stuff by now...) 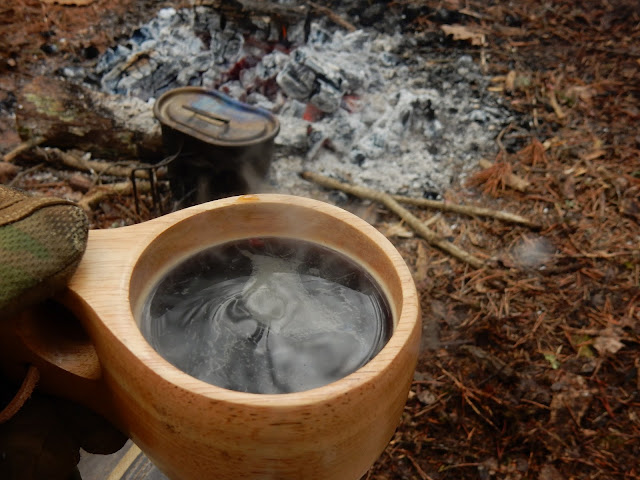 Sometimes it's just good to fill up and sit a while, enjoying the clear entry point of spring into the world in which you live.  I hung out a while, used my knife to mess up a carving or two just messing around, and generally gave some thanks for another complete cycle of the seasons in my life.


By this time, things were starting to close in on the end of the day and even as much as I enjoy being out in this, I really like to be there when my kiddos head off to bed.  They won't be little forever and someday soon I'll have to knock before I go in to check on them.  I decided to head out.  I did snap a few pics along the way though.


Basically a great day with great tools, great food, and coffee made the way you can only get when it happens outside...  Thanks for looking.